Is Fear the Root of Addiction and Alcoholism?

One big-boned, but faint-hearted boy’s existence was riddled with fear and worry, as he was often bullied by other boys. All until this idea occurred to his best friend – if the boy drank some of the magic potion that made the adults in their village invincible, that might give him the courage to fight the bullies. But, the two got caught while stealing the potion. Panicking, the shy boy fell into the potion-filled cauldron. He drank it all, and was left under a permanent influence – it made him invincible.

That boy is Obelix, a fictional hero of the Asterix & Obelix comic series. The story could be seen as a romanticized metaphor of the human kind’s ever-lasting search for “potions” that would help them overcome what they perceive as their weaknesses. 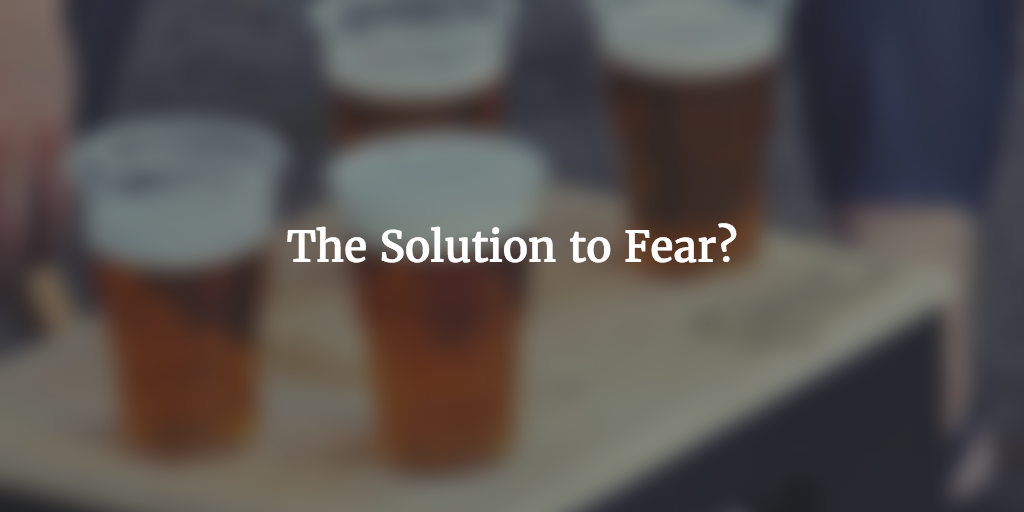 Outside of the realm of fiction, a many real people reach out for “magic potions” of different kinds, believing, wishing, that it will give them the same mythical strength. Unfortunately, Asterix & Obelix failed to tell us about the dark sides of that real-life magic: addiction, illness, and death. According to WHO’s data, more than 3 million deaths a year worldwide are attributable to alcohol consumption.

But what’s the need to empty a bottle of spirit in order to get one’s spirits up? “Drowning sorrows” is a common concept. Anger is also an emotion that is often connected to alcohol abuse. But in this narrative that’s spun around alcohol, there is an emotion people would rather not talk about. Ironically, it is an emotion which alcohol is commonly used to subdue.

Probably due to the fact it’s one of the strongest emotional inhibitors, overcoming fear has been one human priorities from the dawn of history. And consuming different substances has always been a quick fix for fear. For example, as Obelix insinuates throughout the comic, the history of human warfare is hard to separate from the history of substance abuse. According to today’s statistics, heavy drinking is still much more common among military personnel than among civilians.

Being in a battle is an extreme situation. But there are everyday fears which are often dismissed and pushed aside but might be equally devastating to an affected person’s life.

When Fear Becomes a Disorder

Fear is an emotional reaction – a feeling of worry, unease, nervousness, dread, disturbance – in relation to current events and perceived threats. Anxiety is a fear in anticipation of future events.

When feelings of fear and anxiety become so significant they begin to interfere with person’s daily functioning for a significant period of time, the state is defined as an anxiety disorder.

It is estimated that globally, one in 13 people suffers from a clinical form of anxiety. One would suppose that the society as a whole would have empathy for an issue that affects so many of us, but that’s often not the case. In the world focused on success, progress and performance, anxiety-stricken people are often labeled as simply “too worried”, “nervous”, or “withdrawn”. Anxiety is too often dismissed as a weakness or a personality quirk. This stance on fear and anxiety one of the reasons why many sufferers don’t seek for help, even when they feel that they might need it.

This is often the time when alcohol and other substances come into play.

Data from Britain tells us that people who experience anxiety or depression are twice as likely to be heavy drinkers. For some, anxiety or depression were there in the first place, and they tried to relieve it by drinking. But for others, the drinking itself causes mental issues, including anxiety. Additionally, some forms of phobias and anxiety carry a higher risk of alcohol abuse. It is estimated that 20 percent of people who suffer from one of the most common forms of anxiety – the social anxiety – also suffer from alcohol addiction.

To figure out why people suffering from crippling fears often reach out to drown those fears with a drink, we have to understand what alcohol does to our brains.

It’s Not Worries That are Drowning, it’s the Brain

The relaxed feeling – “a buzz” – that comes with alcohol consumption is due to the fact that alcohol changes brain chemistry. Affecting neurotransmitters, chemicals that transmit signals from one neuron to another, it hampers the part of the brain that is associated with inhibition. That’s why an initial sip of alcoholic beverage makes you feel more confident, braver, cheerful like you might be able to “drink away your worries”.

But that is so far from the truth.

As you drink more, the brain becomes more affected. With the high level of alcohol in your bloodstream comes a high chance that the buzz will soon be replaced by negative emotions. After the alcohol-induced calm has passed, symptoms of alcohol withdrawal take charge. This could leave you in a worse state of fear and anxiety (or depression, or anger) than it was the case in the beginning. People usually respond to this by drinking more, sometimes to the point of passing out.

Next time the person feels triggered, the cycle is likely to repeat. This leads to greater alcohol tolerance and more intake of the substance. In time, brain’s delicate chemical balance becomes chronically disturbed, leading to all kinds of changes in mood and behavior. That’s why anxiety and other disorders can occur as an actual consequence of alcohol abuse.

If a person uses alcohol to “treat” pre-existing anxiety, drinking might make it worse. For example, alcohol narrows perception, and the same feature that enables you to forget all your worries could make you focus exclusively on the circumstance which you find threatening, increasing anxiety instead of relieving it.

And last but definitely not the least, repeating this cycle in time leads to addiction.

Some signs of alcohol addiction are: drinking heavily four or more days per week; requiring a drink at every social event; drinking five or more alcoholic beverages in one day; inability to stop drinking; needing a drink upon waking up.

Beyond Fears, Beyond Addiction

The sufferer’s anxiety might get worse if he or she is worried about being addicted. But there is a way out of it. Through the right action, many people have managed to overcome both of these difficult conditions.

Although treating addiction as well as anxiety is a too broad and complex topic to be covered within this article, there are some basic steps to take if you’re worried about anxiety-related drinking:

It will take about two weeks for your brain chemistry to get back into balance. Around this time, you should see improvements regarding your anxiety levels, especially as you start having a better quality sleep.

There are many types of therapy that can help both fears and addictions. The one that suits you will depend on your background, sensibility, beliefs and perhaps a recommendation from your doctor. In any case, a good therapist will be able to guide you to the root of addiction and fears. After that, the troubles start to resolve themselves truly and profoundly.

If you can’t afford a therapist, watch out for free counseling services usually made available by humanitarian and church organizations, or maybe try a mindfulness-based self-help approach.

And always remember, we’re only human. Having pleasant and unpleasant emotions, including fear, is not a weakness or a fault, but an essential part of the human condition. Any of us could fall under that weight, but it’s important never to forget that we can get up again.